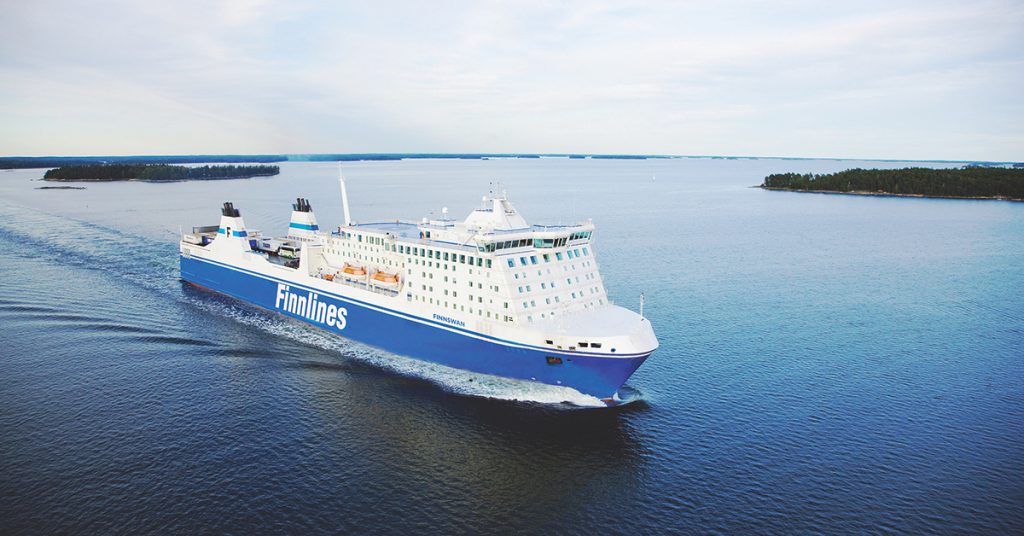 Passenger-specific carbon-dioxide figures for 2018 have been calculated on Finnlines’ passenger routes, Naantali–Kapellskär, Malmö–Travemünde and Helsinki–Travemünde. The figures will be updated on a yearly basis and this will be the base for future calculations.

The Finnlines’ passenger-specific route figures are calculated on the basis of MRV data for 2018 verified by the authorities. Finnlines’ figures have been verified by official certification society.

Finnlines’ ro-pax vessels carry both passengers and freight, and thus the total annual fuel and emission data is divided between these categories. The MRV standard (EN 16258) allows to select between two methods: the mass and area method. Since Finnlines’ operations are mostly concentrated in cargo and freight, it is logical that Finnlines uses the mass method where the freight / passenger ratio is allocated annually according to carried freight and passenger.

The total CO2 emissions of the Finnlines’ fleet have reduced by approximately 30%in 2018 compared to 2008. Route-specific reductions can even be more due to better capacity utilisation.

In 2018, CO2 emissions per passenger on routes:

Differences are due to passenger numbers and, for example, weather conditions and route choices.

Finnlines supports the IMO’s (International Maritime Organization) GHG strategy and its goal to reduce CO2 emissions by at least 50% by 2050 compared to 2008.

Finnlines is committed to long-term efforts for the environment. Environmental responsibility is part of the daily operations of the Company and includes everyday actions – like timetable and route planning or running on optimal speed, load and trim.

In addition, Finnlines will have up to five new vessels which have been designed taking all environmental factors into account. And thus, overall Finnlines’ fleet carbon footprint can be reduced further. Three of the vessels are green battery-hybrid ro-ro vessels which, for example, will be equipped with lithium-ion batteries that will recharge during sea voyage. The stored electricity can be used while in port, making the port stay emission-free. Two of the vessels are next generation Superstar ro-pax vessels which will use modern emission-reducing technology and other advanced systems, thus resulting in less emissions. The first vessels in both series are expected to start in traffic in 2021–2022.

Approximately 90% of Finland’s exports and 80% of imports is transported via seaways and particularly for processed goods frequent liner traffic is important. Finnlines’ ro-pax service combines cargo and passenger traffic in an eco-efficient way and the high utilisation rate in routes and vessels guarantees the possibility to travel in a sustainable and responsible way.

Finnlines is one of the leading shipping operators of ro-ro services in the Baltic Sea, North Sea and the Bay of Biscay as well as a passenger service provider in the Baltic. The Company is a part of the Grimaldi Group, one of the world’s largest operators of ro-ro vessels and the largest operator of the Motorways of the Sea in Europe for both passengers and freight. This affiliation enables Finnlines to offer liner services to and from any destination in the Mediterranean, West Africa as well as the Atlantic coast of both North and South America.