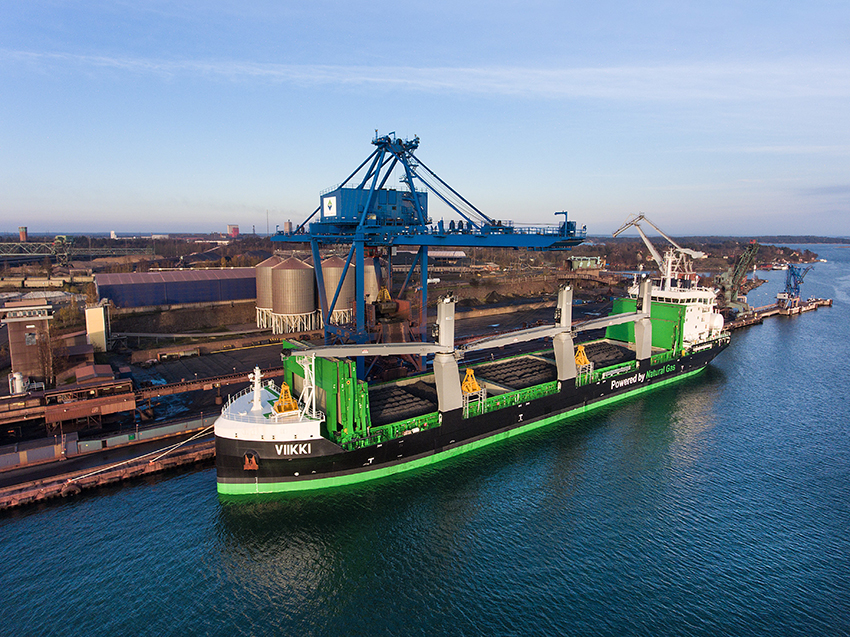 The new bulk carrier m/s Viikki, owned by ESL Shipping, a subsidiary of the Aspo Plc, has started operating on the Baltic Sea. The 25,600-dwt vessel, 160 metres long and fuelled by liquefied natural gas, produces less than half of the carbon dioxide of previous vessel generation, thanks to LNG and many advanced technologies.

M/s Viikki was built in China, and after completion first sailed to Japan to load a cargo of raw materials. From there, she arrived to the Baltic Sea through the Northeast Passage, which shortened the journey from Japan by three weeks and reduced the emissions of the journey by 40 per cent compared with going through the Panama Canal.

”We are highly aware of the discussion about the environmental issues relating to the maritime industry. Design work on m/s Viikki and its sister vessel m/s Haaga was started five years ago, and these vessels are the manifestation of everything that is possible in the way of environmental efficiency today,” says Mikki Koskinen, Managing Director, ESL Shipping.

M/s Viikki features the latest in new technology. One of the central innovations is the use of liquefied natural gas (LNG) in its main engine, three auxiliary engines and the boiler. The ship has been designed in accordance with the Energy Efficiency Design Index (EEDI) that rates the energy efficiency of newbuildings. Even today, the ship meets the environmental requirements of 2025.

Both vessels have been designed for intensive traffic with several port calls a week and cargo handling will often take place with the vessel’s own cranes. A distinctive feature in m/s Viikki are its automatic cranes developed in collaboration with MacGregor that are able to unload the cargo to a conveyor or on the pier unassisted.

Maritime transport accounts for 90 per cent of Finland’s exports and 80 per cent of imports. Because of the country’s geographical position, sea transport is the most important and cost-efficient logistics option.

”Shipping companies are an essential part of the maritime cluster. Over the past eight years, Aspo has invested about 200 million euro in ESL Shipping, because we believe that solutions based on automation and environmental efficiency are the only way to bring the entire industry forward,” says Aki Ojanen, CEO of Aspo Plc and Chairman of the Board of Directors of ESL Shipping.

Maritime future – or one of them – concretized »